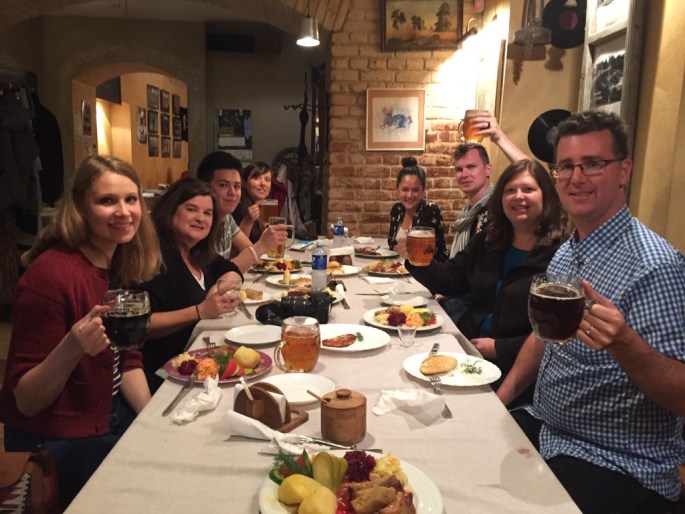 Vilnius almost feels like home turf to me after a few trips there last year, so it was natural that I’d feel a lot more at ease here. To add a little local colour and continue the theme of starting out with ‘local food as eaten by locals’ my girlfriend had arranged not just for a table for us at the original ramshackle branch of Snekutis, a group of pubs owned by an eccentric Lithuanian from the countryside whose pictures decorate the menus, but also a personal appearance by the man himself. To keep the theme of inviting local content creators along to join us for various events, I’d contacted “Fabianas“, a friendly Chilean who moved to Vilnius a few years ago and has a Youtube channel where he tastes and explains classic Lithuanian dishes. We all enjoyed meeting him and taking his advice on what to order. Unfortunately a snafu on food availability, kitchen-closing time and the failure of the waitress to inform us of any of this meant we only got to enjoy the pre-ordered mixed starters in the original Uzupis branch (marked for closure soon as the property developers move in on its plot of land). 3 taxis were summoned and our order for mains was phoned ahead to the newest Snekutis, close to the train station. We arrived, got beers and food landed on the table very soon after. Knowing how hangry bloggers can get, this was definitely a disaster averted!

We had originally had a very early morning planned, but poor weather put paid to our scheduled hot air balloon flight so we had a comfortable 10:30 start for our walking tour. Assembling on Cathedral Square in Oceans Eleven style we met our guide, the serious yet possessed of a wry sense of humour, Daniel. A meticulously timed (I’d asked to arrive at Town Hall Square for a restaurant reservation, we got there at 12:58) and very education tour of Vilnius Old Town followed. Unlike another tour I took in October 2013 we skipped Uzupis, but that was many people’s destination later that afternoon or the next day, and it’s easily explored alone. After a tasty lunch at Kitchen we continued our tour, visiting a Greek Catholic (a fusion of Catholic and Orthodox traditions) church and ended at the Gate of Dawn. Tour over, it was free time until our 8pm treat of a dinner, meeting a few minutes before, Oceans Eleven style by the belfry on Cathedral Square.

The Telegrafas restaurant at the Kempinski is the domain of Catalan chef Javier Lopez. Hailing from that part of the world it should come as no surprise to find this is a fine dining menu par excellence but the nicest surprise on it is the way Chef Javier enjoys working with local ingredients and traditional recipes, updating them with modern techniques. The group thought our dining experiences in Tallinn and at Neiburgs in Riga would be a tough act to follow but I’d been keeping this one under wraps till shortly before and the meal hosted by the Kempinski was in my book one of the gastronomic highlights of the trip. A tasting menu of a modernised Saltibarscai soup, Curonian Lagoon Zander, Latvian venison, finished off by organic Lithuanian cheeses and a surprise round of petit fours was a triumph. The wine pairings (a German Riesling for the first two courses, a magnificent Rioja Seitas Vinas by Baron de Ley for the second half) were superb. It’s no surprise that the sommelier, who was otherwise occupied that evening with an annual sommelier contest, was later celebrating retaining his title.

That early start came today. A 5am rally call then a 30 minute drive to Trakai and before we were properly awake we were standing in a field with two hot air balloons. For many, including myself, this was a first time. All I can really say is wow. The photos and video should convey some of how great an experience this was and given that Vilnius is one of the cheapest places in Europe, possibly the world, to take a hot air balloon flight, this really is an absolute must, providing you don’t suffer from vertigo.

Landing was easier for me than the bloggers, their balloon took a little longer for the ground team to find so they spent a few minutes lying on their sides in the basket after the gas ran out and the balloon fell to one side, taking them with it. Happily they viewed this as all part of the experience and once we’d recovered them all showed varying degrees of pleasure at being ‘baptised’ in earth, wine and fire.

Returning to Vilnius around 10, minds blown, we skipped hotel breakfasts and instead breakfasted outside on the decidedly Parisian looking square by Cafe Montmartre. Crepes, croque madames and english breakfasts provided fuel to get on with the rest of the day – another free day, until 6pm and our appointment with a French chef (see a theme there?).

Later in the afternoon I went with a couple of the group to Drama Burger. Sweet potato fries and truffle ketchup. Burger places everywhere take note, this is the next big thing!

On the chopping block

I’d previously attended a Moroccan cooking class at cooking studio/popup restaurant venue Ciop Ciop and the Vilnius Tourist Board were kind enough to arrange and pay for a Modern Lithuanian cooking class for the whole group. Meeting our Vilnius TB contact at the belfry, by now our regular meeting spot, we went across the river to Ciop Ciop.

Marc, a French chef living in Vilnius, had prepared a menu similar to that which we had enjoyed the night before at Telegrafas, except this time we got to make it ourselves. I volunteered as meat chef, cleaning the venison loin and portioning it into fillets. Everyone else made themselves busy with preparing the potatoes for the dauphinoise that would accompany it, the components of the Saltibarscai soup and the rhubarb soufflé. After selecting some wines from the accessible and reasonably priced selection behind the bar, we each took it in turns to cook and take photos, shoot video and generally do what travel bloggers do in a cooking class. Dividing responsibilities meant that dinner all came together pretty quickly, under the expert tuition and timing of Marc. We all pronounced dinner delicious.

We finished with a night cap at Sweet & Sour Cocktail Bar, close to the Gate of Dawn, with people saying their goodbyes in turn as everyone went their separate ways to each of their hotels spread around Old Town.

I saved my farewells for the next morning, seeing all but one member of the group off and into taxis. No flights missed and everything going smoothly, I breathed a huge sigh of relief. Later that evening the last remaining blogger and I returned to Ciop Ciop for Mexican night. She left two days later on the Friday and all went like clockwork. The worst that had happened the whole ten days was one person leaving an iPhone charger behind, the St Peter’s Church tower ticket kerfuffle, the too-trusting-of-his-badly-programmed-GPS transfer driver and the musical-restaurants of our first night in Vilnius.

Will I do another press/blogger trip? If the results of this one justify it, then yes. Though I think I’ll leave it a good few months, maybe even a year! In the process I made new friends and discovered many of their ‘jams’, learnt from some averted problems, picked up some tips for what more we could be doing at JayWay, enhanced my own knowledge of the destinations and developed a huge respect for anyone who leads group trips all the time.